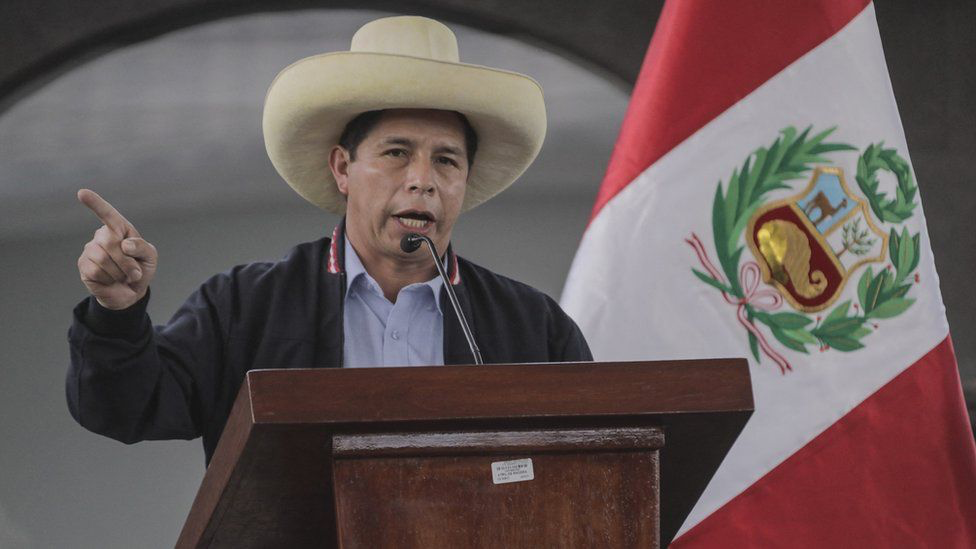 Pedro Castillo was declared President of Peru on June 28, 2021

Peruvian politics has always been interesting. The country has experienced multiple coups, numerous changes to its constitution, and an abundance of interesting presidents. Peru itself is on the west coast of the South American continent with a population of over thirty million people. In Spring 2021, Peru held elections for a new president. The previous president, Fransisco Sagasti, had been temporarily serving as president until the elections. After Sagasti’s centrist stance, few would’ve predicted the two candidates that would emerge in the fight for the presidency. This recent election saw delayed results due to claims of electoral fraud, as well as stiff competition between the far left and the far right.

On April 11, 2021, Peru held their presidential elections. These elections saw 18 candidates running head to head against each other. The two most popular candidates, Keiko Fujimori and Pedro Castillo, gained enough support to move to the run-off elections on June 6. The two candidates seemed to be opposites of each other. Keiko Fujimori, who received 13% of the vote in the first round, is the daughter of the well-known Peruvian politician Alberto Fujimori. On the other hand, Pedro Castillo was an ex-school teacher, union leader, and the proud leader of the leftist party, Partido Político Nacional Perú Libre.

Fujimori came into the electoral race with her father’s legacy behind her. The 2021 elections were her third attempt to secure the presidency since she founded her party, Fuerza Popular (Popular Force), in 2010. Fuerza Popular is a right-wing party that follows Fujimorism – the political ideology Keiko Fujimori’s father built during his presidency in the nineties. The party characterises itself by its support for neoliberal economic policies, conservative social views, and its hatred of communism. Throughout his time as president, Alberto Fujimori gained a popular following and was well-liked by many Peruvians during his decade in office. However, upon the end of his presidency, he fled the country afraid he would be arrested for allegations of corruption. Currently, Fujimori remains in prison for these charges and international human rights organisations continue to look into violations committed during his term. Despite the controversy that surrounds his presidency, Fujimorism is still looked upon favourably since Alberto Fujimori was able to pull Peru out of economic uncertainty. This enabled Keiko Fujimori to enter the electoral game with a strong legacy behind her that propelled her popularity as she promised supporters a return to the good years that they experienced when her father was in office. On the other hand, Castillo was an outsider. He had steadily increased his popularity over the years through partaking in protests around the country. When Castillo won the run-off elections in June, many were shocked that the underdog had managed to secure power.

The surprising elections results were met with immediate backlash by none other than the opponent herself. Keiko Fujimori halted attempts to immediately inaugurate Castillo by claiming that there had been instances of electoral fraud. In a situation similar to what the United States experienced after Trump lost the presidential election in January, Fujimori came forward with her accusations loudly but with very little evidence. She attempted to search for anywhere she could take away the 44,000 extra votes her rival had acquired during the polls. In doing so, Fujimori had lawyers looking to reject the validity of votes from over 200,000 Peruvians. These lawyers focussed specifically on poor and indigenous voters. These voters are not only commonly left out of Peruvian politics, but they also overwhelmingly showed support for Castillo’s presidency. The polarised rhetoric that surrounded these elections lead to rampant racism on Peruvian social media either targeted at the Japanese-descended Fujimori or Castillo’s indigenous voters. After weeks of looking into accusations, the election was declared free and fair. This ruling was supported by many international bodies as well as the US Department of State. On July 19, Castillo was declared president and Keiko Fujimori accepted the defeat of her third attempt at running for office.

Most Peruvians had been unhappy with the candidates they had been presented within the elections. A far-left and far-right candidate meant those with more moderate policy preferences were forced to sort themselves into one of the two categories. As we look forward at Castillo’s options and plans, it’s hard to see whether his ideology will translate into policies. He maintains a commitment to democracy and many hope that as a mestizo from a poor and rural area, he will successfully be able to integrate the most impoverished citizens back into the Peruvian economy and political system. However, some of Castillo’s promises have been shrouded by more controversy and will be met with hard opposition from the right-wing members of Congress.

When he was in the running for president, Castillo had made many plans that may not come to fruition. Firstly, Castillo had promised to nationalise many of the key industries in Peru. Many were worried about what this may do to the Peruvian economy and its development, and since the election, Castillo has retracted many of his promises to do this. He has also tried to commit to creating a new constitution however polls show that less than 30% of Peruvians want this change. This is also unlikely to occur. Castillo claimed he would honour the current constitution when voting for a new one. This means that any amendments require a majority in congress and with multiple opposing parties holding the other seats, the chances of this are small.

It is clear to see that Castillo will be facing his challenges as his administration navigates Peruvian policy. Firstly, Castillo’s administration is clouded by distrust from the electorate. Being an outsider, the people know very little about his history besides the fact that he was a teacher and a union member. His closest aides have also been appointed and many of them are close friends from his time in the union or even members of his extended family. This has made citizens worried that he may be corrupt and will misuse Peruvian funds.

To make matters worse, his party has a minority of seats in Peru’s fractured congress which may make it difficult for him to pass any legislation that Fujimori’s party may want to block. This means that those he has sworn to improve the lives of, such as Peru’s poor, indigenous communities, may see no tangible change. Castillo’s government is also entering into governance in a difficult period. Peru is suffering economic hardship as a result of the coronavirus pandemic and has had more officially recorded deaths as a share of the population than any other country. While poverty rates have risen sharply, public funds have diminished in attempts to prevent more deaths and economic disasters. These conditions will add enormous amounts of pressure to Castillo as his administration governs Peru. Hopefully, the chaotic circumstances will not prevent his ability to govern and he can live up to some of his promises about helping those that the Peruvian political system has left behind.